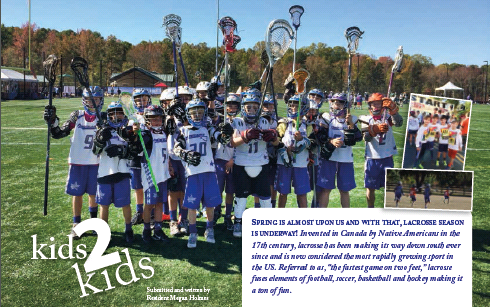 Posted at 10:00h in About CNL, Learn It, Live It, Players, Parents, Coaches by web_cusabo

The history of lacrosse and how it got all the way to Charleston is as rich as the stories told by the Native American tribes who gave it a name. It first made its way to the youth of the greater Charleston area six years ago when the town of Mt. Pleasant started a recreational program. However, there has never been a program for children living on the peninsula of Charleston until visionaries Laurie Yarborough, Robert Hagood, Dan Russler and Donovan Smith founded Cusabo Nation Lacrosse, a non-profit 501c3 in January of 2014. Their shared vision coupled with a creative partnership with the City of Charleston Rec Department, was to create a program that would teach players self-discipline, selflessness, leadership, lifelong fitness and teamwork through the sport of lacrosse. Cusabo Nation Lacrosse is a value based program with dedicated, passionate, US Lacrosse certified coaches, many of whom played in high school and/ or college.

In the last year, Cusabo Nation Lacrosse has grown exponentially and now offers an expansive program including a Spring Rec league– running from mid-February through April, Summer Travel Team running from mid-May through June and a Fall Ball clinic running from October through mid-December.

In addition to this, they offer free “Learn to Play” clinics designed to expose children with little access to funds or equipment. Cusabo even started a high school team designed for high school aged players that do not have access to a school team of their own acting on the Cusabo mantra: “Learn It, Live It, and Give It.”

Cusabo is a Native American term referring to a family of Indian tribes along the South Carolina coast, including the Ashepoo, Combahee, Coosa, Edisto, Escamacu, Etiwan, Kiawah, Stono, Wando, and Wimbee. This tribal Cusabo family banded together for survival. Much like the Native American Indian families, Cusabo Nation Lacrosse is family run and is an entirely self funded not for profit organization.

The Cusabo founders dreamed the dream of lacrosse being played on the peninsula but there were some fundamental logistics that needed to be addressed before anyone got to actually play stick and ball. The first obstacle was finding a location for practices and games because as we know, Charleston is a small, desirable city with limited green space on the peninsula not being eyed by developers.

A regulation lacrosse field is 110 yards long by 60 yards wide. During the early days, founder Robert Hagood recalls talking to landscape architect and Deputy of Parks, Jason Kronsberg, about his dream and was informed that the City of Charleston had a tract of 14 acres in a land bank on the northern tip of the peninsula referred to as “Hall II” fields. Hagood ran the calculations in his head and figured this was not only large enough to fit one lacrosse field but possibly 6. If they could use this field it meant that Cusabo Nation Lacrosse could invite other teams to play and integrate the lacrosse community. After speaking with Laurie Yarborough, Director of the City Rec Department, Mayor Joe Riley was asked about the use of the “Hall II” fields. The Cusabo Nation Lacrosse founders were given miraculous news; the mayor and the town council of the City of Charleston, had granted Cusabo a Memorandum of Agreement (MOA) for the use of the “Hall II” fields. In the “if you build it he will come” spirit, they had their green space but now they had to build the program. The dream was slowly becoming a reality. The City of Charleston granted the use of this land on one condition, Cusabo Nation Lacrosse had to promote, teach, and grow the sport of lacrosse for the children of the City of Charleston and provide equipment and funds for those who could not afford it. “The birth of Cusabo was made possible by a government and community partnership which could not have been achieved without both entities working together as a team,” says cofounder Dan Russler.

To grow the program the Cusabo founders had to find willing participants who shared their passion for the sport of lacrosse. The City of Charleston Recreation Department has limited funding and was unable to allocate money towards a start up lacrosse program; however they pledged to do whatever they could if the Cusabo founders could get funding. The Cusabo Nation Lacrosse founders made it their mission to raise funds through an entirely parent led grass roots initiative. They called upon friends, families and neighbors to join forces and raise money and awareness about this growing sport and promote the positive impact it would have on Charleston’s youth. Not only has Cusabo Nation Lacrosse registered over 150 players in its first year, it is on track to double enrollment in 2015. Thanks to generous community members who graciously donated large containers to store equipment on the field and others who have donated time and equipment, it is a viable far reaching program. If it takes a village to start a lacrosse program then there is a new village and it’s called Cusabo. In the words of Thomas Spigner, the Youth Sports Coordinator Peninsula, “the greater the obstacle the more glory in overcoming it.” Cusabo takes its commitment to its 501c3 status and promise to the City of Charleston to provide a lacrosse program to all children on the peninsula very seriously and last month cosponsored a free “Learn to Play” clinic with Bitter Lacrosse and the City Rec Department. During this “Friday Night Lights” event at Harmon Field, children who had never heard of the sport called lacrosse and had no access to equipment were given sticks and instruction by talented coaches and professional players determined to spread the love of the game to those who may never get the opportunity to play. Cusabo Nation Lacrosse is provoking real change in our community. Thanks to the harmonious collaborative effort between government, community and parents this volunteer run organization is well on its way to changing the lives of children on the peninsula through the love of athletics.

In the interest of the village, and in the words of Syracuse lacrosse great, Matt Abbott, “Play for the guy standing next to you.” Come out this spring and support the Cusabo players at “Hall II” fields and for more information on Cusabo’s program please visit their website at: CusaboNation.org.