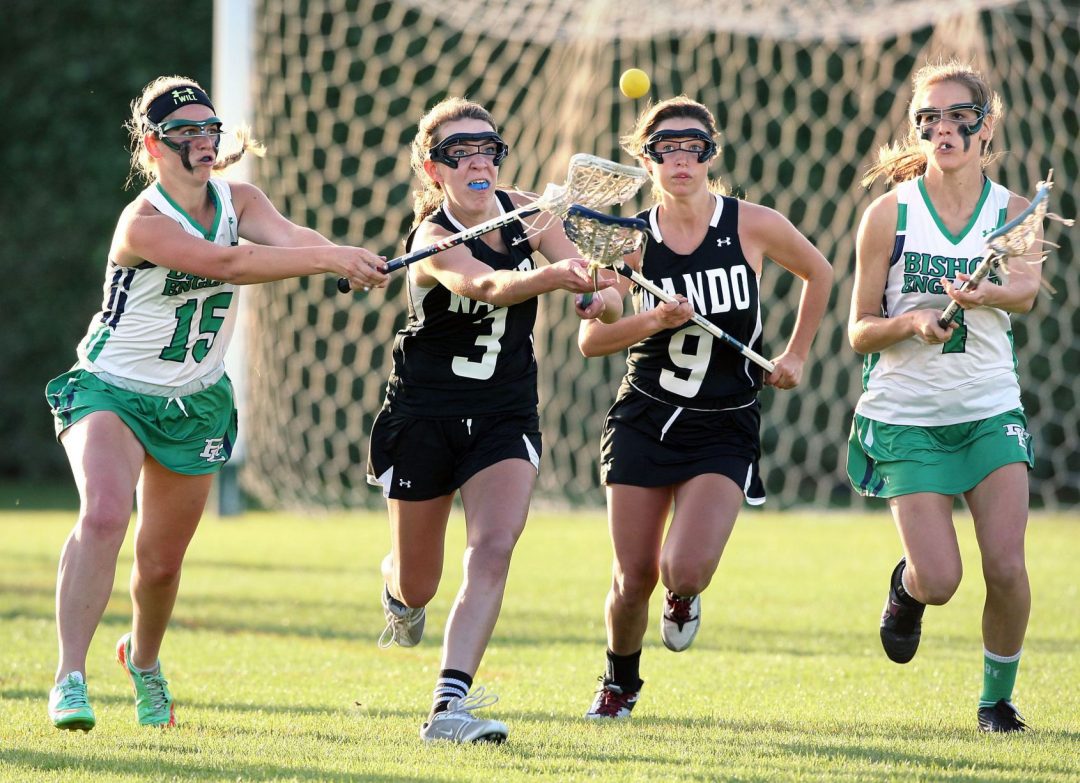 Bishop England and Wando played in the Lower State championship game last year with Wando winning in sudden-death overtime to advance to the state final. In the current state rankings, Bishop England is No. 1 and Wando No. 2. Wade Spees/Staff/FileHigh school lacrosse continues to be the fastest growing sport across South Carolina with the number of schools fielding varsity teams tripling in the last three years. But most of that growth is occurring outside of the Lowcountry, which is home to several of the best programs in the state.

There are 43 high schools schools fielding boys lacrosse teams and 37 with girls teams in South Carolina. The Lowcountry has four boys teams and five girls teams, including Ashley Hall, which competes as a club program. The sport is booming in the Upstate with most of the growth in Greenville, Spartanburg and Rock Hill. Lacrosse also is spreading quickly along the Grand Strand.

Currently, the Wando boys are ranked No. 1 in the state. Porter-Gaud, which competes in SCISA, is ranked fifth. In the girls’ poll, Bishop England is No. 1 and Wando is second.

The success of those programs has not translated into a surge of interest among other schools in the area. The reason, says Porter-Gaud coach David Scully, is money.

“It’s not a cheap sport to play,” said Scully, whose team hosts Wando at 6 p.m. Tuesday. “The equipment is expensive, which may prevent a lot of schools from taking it on. At Porter-Gaud we purchase the helmets and collect them back after each season, but the players are responsible for all of the pads, gloves and sticks. The stick itself can run into a lot of money — at least $200.

Scully said the cost to properly equip one lacrosse player is about $600.

“In our case, a lot of the players already own their equipment because of rec or travel teams. But for a school just starting a program, maybe without a lot of kids who have their own equipment, the cost is a major concern.”

But it’s not just equipment. Scully said most athletic departments in the area are hesitant to add another sport to an already busy season. Adding more home games means more security and other essential personnel such as athletic trainers. Facilities are also a problem because most schools field varsity and junior varsity soccer teams, which usually share the school’s football field.

Perhaps just as important is the fact that many high school athletes have never been exposed to lacrosse. Scully said the Mount Pleasant Recreation Department is the only one in the Lowcountry that fully supports and promotes lacrosse — with programs starting at age 6. Scully said most of the kids in the Mount Pleasant leagues feed into Wando and Bishop England, with some going to Porter-Gaud.

“They are busting at the seams in terms of the popularity and participation,” Scully said of Mount Pleasant. “Unfortunately, it has not taken hold in other rec departments. There are a lot of good lacrosse players with no high school to play at because if they don’t go to Wando, Bishop England or here, they can’t play.

“A lot of them stay involved in the sport via the travel teams in the summer and fall but there are a lot not playing in high school.”

A non-profit group — Cusabo Nation [Lacrosse] – is assisting the City of Charleston Recreation Department in promoting and developing a lacrosse program. That could help create interest in other area schools as younger players grow in the sport and reach the high school level.

Cusabo also forms club teams for area players not involved in high school programs. At Wando, for instance, coach Lance Renes had 112 prospects attend a tryout for the Wando program. He kept 35 players on the junior varsity and varsity rosters, cutting 42 players. Many of those players were able to join the Cusabo club team this spring.

“Honestly, I think the biggest reason for the lack of growth in this area is due to a lack of student interest in the sport outside of Mount Pleasant,” said Renes. “There simply is not a student demand right now. We are fortunate here in Mount Pleasant. We certainly have a monopoly when it comes to lacrosse.”

Renes said schools aren’t going to spend the money for lacrosse until there is a greater demand.

“With transportation, fields, personnel — it is a huge financial undertaking,” Renes said. “It comes down to interest. I’m sure if a school’s student body had overwhelming interest in the sport, most athletic directors would do what they could to help get them a team. That interest is not there due to a lack of recreational leagues.”

And, with a lack of local competition, the area schools are forced to travel.

“We have to be very creative with our schedule and our travel,” Renes said. “We’re the only school in the area with a junior varsity team so a lot of that schedule is travel. We make it work but we are hurt by not having many teams here.”